A time series is a chronologically ordered sequence of observations, which is assumed to be part of the realization of an underlying stochastic process. To be able to predict future values, or to monitor the ongoing process with the aim of uncovering structural changes as soon as possible, the modeling of the process is of utmost importance, which, in turn, requires an in-depth statistical analysis of the available time series.

An
Introduction to
Discrete-Valued
Time Series 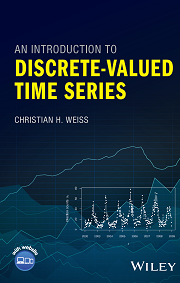 Contributions to the encyclopedia “Wiley StatsRef”: