Research focus at the Institute of Electrical Measurement Engineering are wireless integrated sensor systems, mainly for industrial and sporting/healthcare applications. Some of our project results are presented below. Our work and the results we achieved would have not been possible without continuous support and encouragement of our industrial partners, e.g. FESTO AG, ENOCEAN GmbH, AIRBUS OPERATIONS GmbH and RADLABOR Freiburg, and the funding by publicly sponsored projects, e.g.

There are special requirements wireless sensor/actuator communication systems have to fulfil when they have to operate in harsh, metal-rich production cells:

All these issues are tackled by our research and development activities in the field of „Wireless Automation“.

Radio systems often found on the factory floor like Bluetooth, Zigbee, Wireless HART or WiFi 802.11a/b/g/n. All these wireless systems can be detected and classified in realtime by the low-cost spectrum analyzer developed at eMT. Even Bluetooth systems in the scanning mode can be measured. In the video above you see a WiFi system operating between 2452 MHz and 2472 MHz between 0 s and 1 s. Between 1 s and 4 s Bluetooth in the scan mode is active. Data is exchanged in a Bluetooth network starting at 4 s. At 8 s a WiFi packet appears.

Efficient wireless solutions for industrial automation applications require efficient gateways to connect the classic wired fieldbus-layer with distributed wireless sensors and actuators. A modular wireless gateway was developed that handles up to 32 sensor/actuator nodes with a response time less than 5 ms. A packet error rate less than 10-9 can be guaranteed. A modular architecture allows a system implementation with standard commercial of the shelf components.

The machine is operated totally wirelessly. Different spheres are detected by colour sensors and sorted pneumatically. The following video gives an impression oft he system performance. The red spheres directly fall into a small container whereas the green ones are shot pneumatically to be sorted out in the next process step. Between colour detection and shoot a time-delay of only 3 ms is allowed. The system still operates without failure even if 3 WiFi systems are operated in parallel. (Video)

To support the installation of radio systems in factory automation environments we also develop engineering tools to estimate system performance before the wireless system will be installed on the factory floor physically. In the following Video multiple cross-sectional views through an electromagnetic wavefield are shown. With the help of such simulations systems engineers can see if a stable communication link can be maintained under all possible circumstances.

Broadband channel measurements have been carried in the frequency domain with a setup that is shown in the next figure. A multi-carrier continuous-wave (MCCW) signal is generated by a vector signal generator (VSG, Rohde & Schwarz, SMU200A). The MCCW signal is comprised of 81 carriers with a carrier spacing of 1MHz. The output signal has a constant small distortion up to a maximum output power of 19 dBm. Range extension was achieved by an external power amplifier with an amplification of 31 dB. A real-time vector signal analyzer (VSA) was employed (Tektronix RSA6106A) for signal reception offering a maximum analog bandwidth of 110 MHz. The center frequency of the VSA can be adjusted between 9 kHz and 6.2 GHz. An external reference clock served as frequency reference. Inphase and quadrature signals are sampled with a resolution of 12 bit, respectively. Then the sampled values are transferred in 16 bit words to a signal recorder (SR 500) with a data-rate of 600 MBps, where they are stored on an array of hard discs with a capacity of 10 TB so that measurement of several hours are possible. Processing of the raw data is performed directly on the signal recorder in standard programming languages C/C++. The signal recorder is controlled by a host PC, which also can be connected to a triggered video camera. This allows a synchronous video-monitoring of the environment during the measurement of the radio channels.

The measurement system is designed for the simultaneous measurement of up to seven wireless channels. The transmit antenna and the seven receive antennas are switched by a control unit that is able to switch between the receive antennas and a reference path at cycle times of 100 µs. Furthermore, the control unit performs the preamplification of the received signals and generates the trigger signal for the VSA and a connected video camera for scene analysis. In the next video the time-variant radio channels between a wireless gateway and seven distributed wireless sensor nodes are measured in real-time, i.e. the behavior of seven ISM-channels are monitored continuously over time with the full bandwidth of 80 MHz. Here the wireless sensor nodes (red dots) are mounted at different positions over to a high-speed plotting machine. 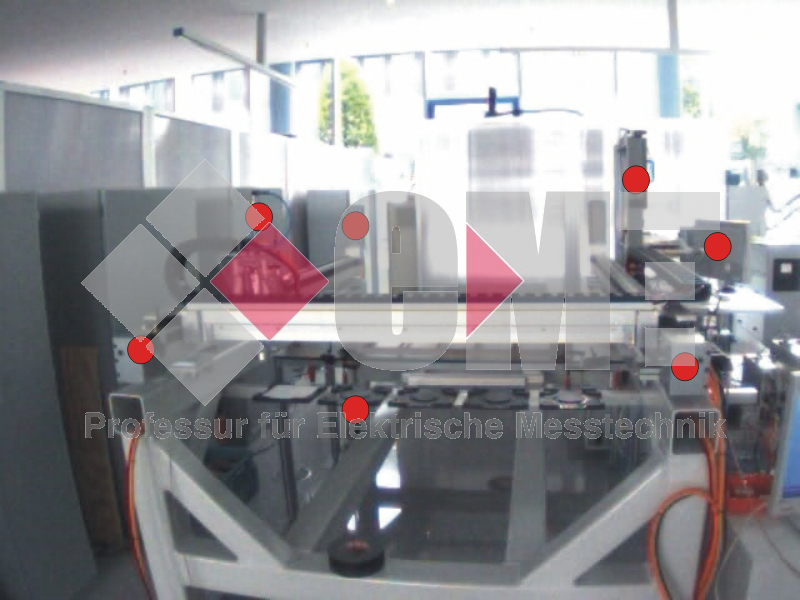 An energy self-sufficient glass break detector, consisting of an Energy Harvester (EH), Energy Storage Element (ES), µController (µC), as well as an UWB-Transmitter (UWB) and an additional ISM-band transmitter was developed, illustrated with the help of the following photo.

Design and Characterization of RF-Frontend Components

We support the HSU Student Racing Team with a wireless iPhone/iPad-based monitoring system, e.g. for motor diagnosis. The system is also used for multi-sensor data fusion and localization.